Part 1, Apr 25 2017
" Begin…where you begin. At the end of a long edge, by short light
…The beginning is the end… where bodies fail the world. What it knows.
…souls blossom and words decay. "
- Etched blade fragment found at the Seals.

Daniel came ashore at night, off the first ships from the Old Continent. The arrival was worse than the voyage’s storms. A lot of settlers took off alone inland and got killed by monsters in the woods. By the time Daniel and three others decided to group up, all the other survivors had scattered. 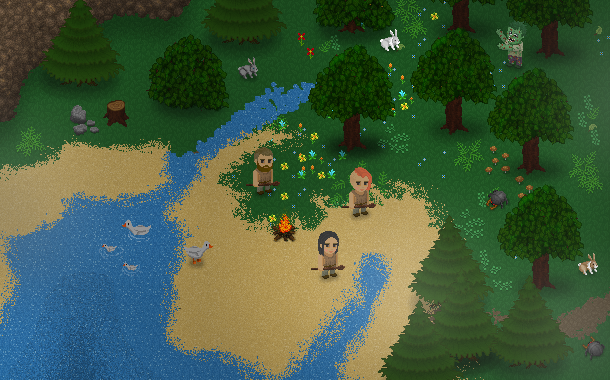 As a new player you arrive on the coast of an unknown continent they call the Edge of the World. Beyond are lands of evil and you are here because you answered the call to repair the breaking seals that protect your world.

Old stories of this unexplored continent declared it at the edge of the world. Daniel and the others pushed inland. They needed what few advanced weapons had been lost with the first scouts. Everyone’s skills were raw. Daniel was good with a crossbow so he helped cover his companions as they hacked with axes and swords through the undead. They won ground. They bled through the darkness. They kept together.

Once they had better steel, they set to the good work of putting up an outpost. No one had ever been further from the old shores. Daniel and the others had themselves been born on the refugee ships. The storms had wiped out most knowledge of their old ways. They built from nothing, tilling lumber, farming, hunting and mining what they could find. 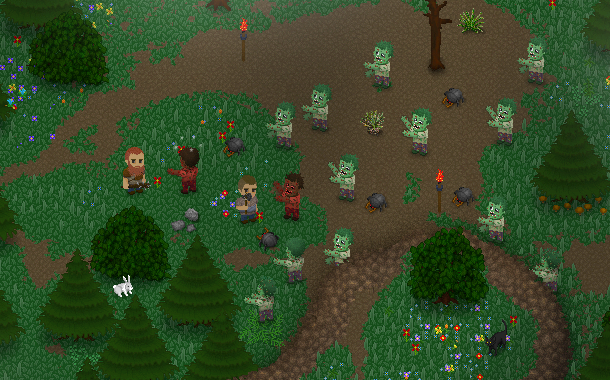 You have to learn combat and try out different item combinations, as the combat system is skill- and reaction-based rather than depending on grinding the best items.

The survival mechanics of the game will let players plant seeds they find, hunt animals for meat and hides, gather cotton for wool, as well as cut timber for building and fires, or mine rocks and metals for crafting. There's many ways resourceful players can choose to fend by themselves or with their groups in the wild.

By the time their first huts were finished, they had fended off several waves of monsters and undead that came ceaselessly from inland.

The land was brutal. Aside from the undead they fought hunger, cold and decay. But they worked the land hard and their seaside village flourished into a city as more ships arrived from the old continent. New settlers looked up to Daniel and his first companions. As veterans, they were elected to guide growth and lead the blooming colony against the relentless darkness. One of Daniel's most able companions was Alex, a sage trader who had talent for negotiating and helping traders prosper. 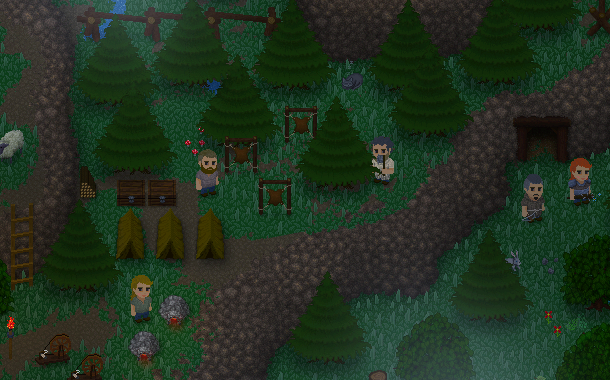 Things decay in the world and you have to refill resources and re-craft weapons. Everything that is created will decay… so the economy doesn't inflate.

Play your own way in this open world. Whether you like leading a group, managing commodities and prices, building and crafting, or just adventuring in the wilderness.

Traders and miners had been bickering too much over prices, so she volunteered to guard the town's treasury and establish fair markets for merchants and smiths. It didn’t take long for refugees to arrive from the wild. Those who had landed in other points of the coast and had a trade, but had no luck defending their small land claims between fragmented settlements. 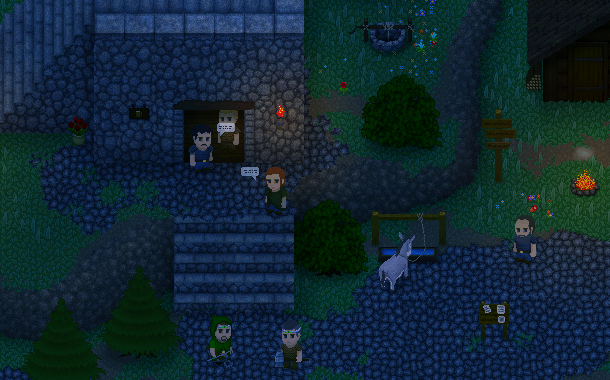 Economy and commodity prices are solely driven by players. They decide how the markets in their town operate and can even pool resources for a common cause.

Although Alex led the city's council to accept more people thanks to a surplus of food, room was scarce inside the walls and settlements spread outside their protection. Those with no trade had formed bands to raid the vulnerable outposts. Rumor spread they were led by a clan which targeted weakened survivors from clashes with monsters. 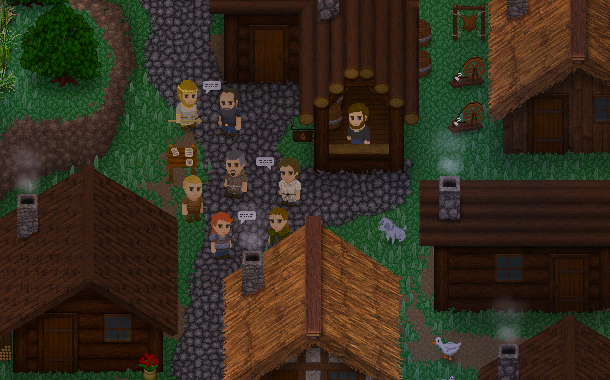 Your clan can choose its structures and semi-democratic ways of decision making to help organize groups. Your city council for example, could be composed by the most important guilds (traders, blacksmith, defense, etc.)

Daniel and Alex knew the strength and prosperity of their city was founded in organization and their well-earned fairness. They declared a great draft of warriors throughout the conflicted coastal settlements. Those who wanted prosperity and not chaos. Some were even given incentives of land to work if they were pacified. 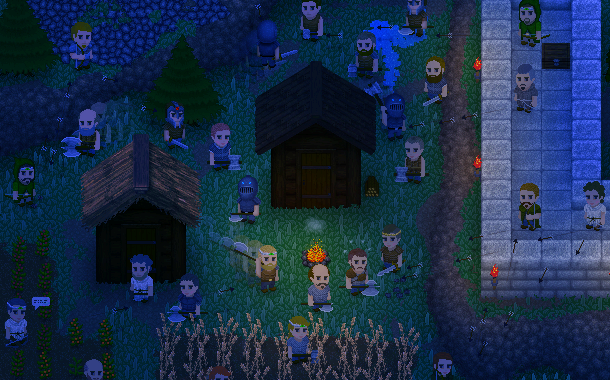 Bandits and evil-doers can be dealt in whatever manner the clan chooses. Whether disbanding or banishment, and your clan can offer bounties to bring them to justice.

War can be waged in many ways, you can destroy enemy buildings, cut off their economic resources, sabotage their trade routes, turn the population against their leaders via diplomacy or whatever strategy you and your clan mates decide…

Soon, Daniel had a small but skilled group of fighters to defeat most of the war lords in the coastal territories. They ventured deep into the wild and gathered finer, rarer metals that less organized groups couldn’t find. They overcame, and their little coastal town became the capital of a blossoming kingdom, led and governed by a community of peers and able guilds. But that which the victorious celebrate is taken from the defeated. Many fledgling neighbor clans laid claim to spoils of war Daniel and his chiefs had taken as their right. 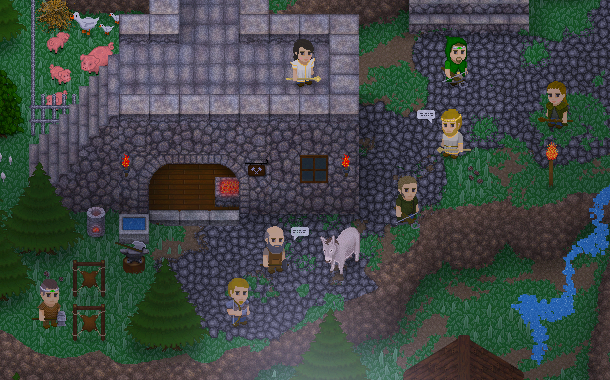 The game's flat power-curve means that even players with powerful equipment can be defeated by a group of averagely equipped and skilled fighters. Distances between weak and strong items and skills are relatively small.

You'll need an organized group effort to equip the best fighters with the best gear. The scarce metals and gems that are required lie deep in the challenging darkness. Experienced craftsmen are also required. The process has a long value-chain, so only cooperating groups can reach those resources or get to that level.

These treasures included magic items, and city sages used them to build a Temple with a shining altar that called the dead back to life. Their clan had a great advantage, as their fallen scouts and warriors could be recalled to the town for a second chance.

The neighboring clans took their chance at the war chest Alex had amassed from pacifying the territories. Just a few mornings after the Temple’s altar was finished, Daniel looked out from his city’s walls. Dust and war spears came up their eastern horizon. He sounded the alarm and prepared his generals for a siege…

This three part tale is a hypothetical depiction. The aim is to give readers a glimpse of how their own stories could go in Blossom & Decay, a sandbox MMOaRPG set at the edge of a perilous and unexplored continent. Players mold the empty terrain with their buildings while fighting monsters and searching for resources.

Apply as a tester Join the next phase of the sandbox demo,
currently working on it (not open yet). Currently you can play on your PC

Initially, we published a rudimentary, combat demo to get a taste of fighting in the game, and we are currently testing a closed sandbox demo that introduces more complex mechanics like crafting, offline AI, procedural map generation, and others.

We aim for a Kickstarter campaign before release, so we would be thankful if you share this project. You can find out more about the video game in our 2018 article Blossom & Decay's game concept.

If you are interested in trying the closed sandbox demo go to Blossom & Decay and apply.

If you have questions and want infos about the game, please join the conversation on twitter. All feedback is welcome and your commentaries are appreciated.

Look out for Part 2 - the Darkness, the next episode in our series, Stories of Blossom & Decay. And thank you for joining us in this idea that we hope will take a step in developing the full potential these beautiful interactive environments can offer.